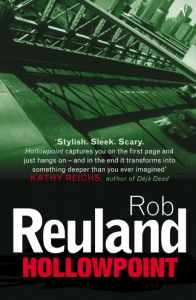 Brooklyn prosecutor Andrew Giobberti can still remember himself as a father, as a husband, and as the chief of the Homicide Bureau, working out of a hard city’s hardest precincts. That was before a car accident took his daughter but left him untouched—except where it matters. That was before his wife walked out. That was before he became mired in blame and regret that for a year has emptied his life of all meaning and purpose. Everyone wrote him off as too far gone for saving.

Then a case crosses Gio’s desk—the murder of a young girl—that may change everything. Over one impossibly hot August, Gio confronts the fine line that separates the guilty from the innocent, the killers from those who put them away. And as he seeks the girl’s killer, the truth he uncovers may be the final hit. Or it may give him back his life.

“Brilliant . . . Devastating . . . Hollowpoint makes you look into the abyss of life in what I expect is the beginning of a major literary career.”  Philadelphia Inquirer

“An unforgettable first novel that uses language so carefully cadenced it borders on poetry.”  Chicago Sun-Times

“An unforgettably seemy world it is, light years from the glossy courtroom dramas Reuland deftly skewers in passing.”  Kirkus

“Reminds us why we find stories about the law so fascinating.”  David Liss